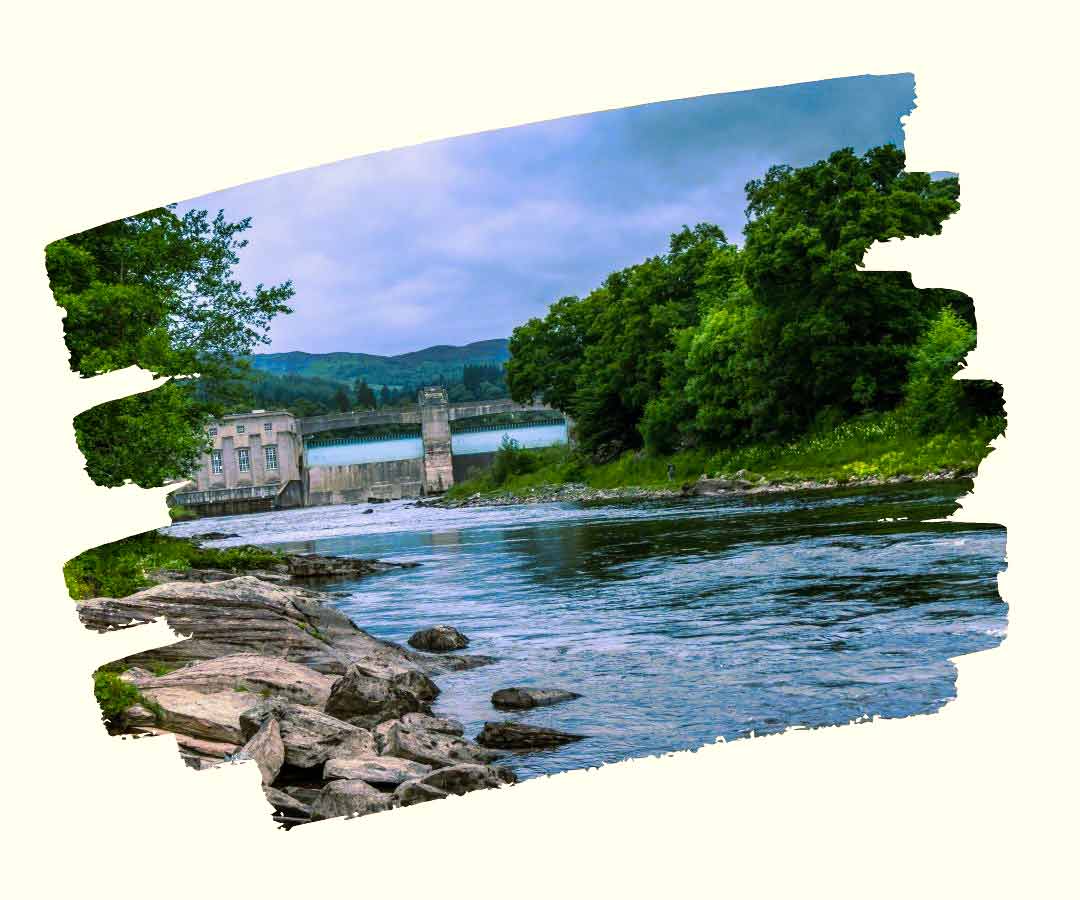 Pitlochry Dam has a fabulous location at the eastern end of Loch Tummel and enjoys the gorgeous views that go along with that. Undeniably, this is reason enough to set aside time, on any visit to Pitlochry, to walk the short stroll from town to this iconic structure. However, there is also an added attraction in its State-of-the-art Visitor Centre. So, do set aside further time in your agenda to take in this 4 million pound investment in the guise of a high-performance fountain of fascinating information along with with 60 seater café. This offers the ever-appreciated opportunity for refreshment, further viewing platforms and a fascinating insight into the ingenuity that brought hydro-electricity to Scotland.

How fortunate for Pitlochry that such an iconic centrepiece to its visitor appeal lies just a short stroll from the centre of town! Many environmentally-aware folk are taking to car-free holidays and the dam is a great place to visit on foot from the town centre. Not only are the visuals of the entire area simply breathtaking, but there’s a fascinating insight into its contribution to the environment, too.

Leave the car behind
When you can see a bigger picture . . . . .
Come Without the Car
The benefits of taking it slow and easy only become apparent once you've engaged with your surroundings at the kind of level where you actually feel part of it. You certainly can't do this whizzing by in a car. Why not give it a try?

You can get to the Dam and fish ladder via an extremely pleasant country lane that links town and loch. Once you have explored every inch of this first-class facility, you may elect to walk onwards, taking in more of the lochside charm of Pitlochry’s Tummel Valley. Be sure to remember to take your phone or camera. The views are simply stunning.

Pitlochry’s fabulous Faskally waterway – the body of water held back by Pitlochry dam, is the last of five reservoirs created in the Tummel Valley. There can be little doubt that a truly magnificent expanse of water was created during the process of setting up this ingenious system for power generation.

There is a series of nine hydro power stations in the entire network. Interestingly, the idea was conceived long before the concept of global warming gained any currency and the aim was always to make a positive contribution to the rural framework that exists around the system. The entire project is underpinned by strong architecture with technological ingenuity and a desire to improve environmental factors.

One of Pitlochry’s most popular loch-side walks allows the hiker some fabulous views along the length of Faskally, taking them part-way around the perimeter of the Loch. As a resident of Pitlochry that visits the loch-side almost daily, I can personally vouch that the scenery is never the same on any consecutive day. The light quality is quite extraordinary in these parts. The area forms part of the highly popular Killiecrankie walk

Things to do in Pitlochry
Stay Safe at Rosemount Pitlochry 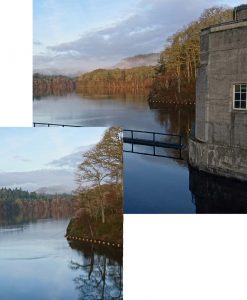 For those with a fascination for the history of this epic story, an in-depth account of the struggles involved in the early development of the hydro-power industry may be found at http://www.historic-scotland.gov.uk/power-to-the-people.pdf

In its tourist-related context, the dam receives 500,000 visitors each year. Above all, however, the visitor centre celebrates its developers’ role in bringing hydro power to Scotland. The epic journey of the Salmon, from spawning to breeding, is also a feature of the educational element intended for the centre.

The life cycle of the Salmon is, indeed, an epic tale. Moreover, it portrays a fascinating insight into how a species adapts to alternately living in two very different environments. As a work of engineering precision and environmental adaptation, the Salmon, too, is worthy of great respect! At Pitlochry Dam Visitor Centre, you may gain a fascinating insight into the life cycle of this extraordinary creature