The Pitlochry tourism experience is greatly enhanced by the fact that it lies at the centre of a radius of a large number of stunning day trips by car.

For example, fewer than 90 miles north of Pitlochry lie Inverness, the capital of the Highlands, Loch Ness, the unforgettable Drumnadrochit and Fort Augustus.  This area can provide 2 separate, enjoyable days’ touring. We suggest combining the intriguing Loch Ness with either a visit to Inverness, or one to Fort Augustus. With determined progress, it is possible to visit all 3 locations in one day and return to your Pitlochry base.

Pitlochry to Inverness by Train

Inverness is approximately a 2 hour train journey north, through fabulous “Gateway to the Highlands”   scenery, with deer and birds of prey in abundance. Once in the city, you will have 3 or 4 hours to explore Inverness Castle, walk along the pretty river Ness, take in a city tour bus and shopping in the Eastgate Centre. The train takes the Highland Line through Blair Atholl and the pass of Drumochter to Newtonmore, Kingussie and Aviemore – gateway to the Cairngorm mountains , before climbing again over Slochd Summit before descending finally to Inverness – Britain’s fastest growing city. By Car Travelling by car will allow you to take in some of the wonderful places to see in the vicinity of Inverness that are not so accessible by public transport. Culloden Enroute to Inverness, you may elect to visit the exciting new Culloden Battlefield visitor centre and exhibition opened in December 2007. Through recent archaeological and historical research the National Trust for Scotland discovered that the previous centre was sited on the third Government line of the battlefield. With the Trust’s resolve to return the battlefield to as close as we know it on 16 April 1746, the centre was moved. The previous facilities had struggled to cope with visitor numbers at peak times and its site will be returned to being part of the battlefield. The new centre and exhibition allows the whole Culloden story to be told in an innovative and interactive way which appeals to all the family. Inverness City Centre Shopping areas in the City Centre include the ‘Old Town’ which offers a large choice of independent retailers. The East Gate Shopping Centre is a modern shopping complex in Inverness City Centre, comprising mostly of multinational shops with many of the big name retailers and brands. Inverness shops offer a large choice which includes the Victorian Market  that has many small family run shops. Cawdor Castle, NAIRN Cawdor is romantically linked by Shakespeare with Macbeth. A superb fairy-tale Castle, and just what every visitor is looking for …  Scottish history that you can touch and see and sense for yourself. Cawdor Castle is not another cold monument, but a splendid house and the home of the Cawdor family to this day. The Castle dates from the late 14th century and was built as a private fortress by the Thanes of Cawdor. Dolphin Watching Chanonry Point – Dolphin Watching Just east of Inverness, in the Moray Firth in Scotland, is one of the best places in the world to watch dolphins from land. From June to August the dolphins chase salmon through the currents just a few feet from the shore on a pretty much daily basis Take the A9 out of Inverness across the Kessock Bridge. Turn right at Artafallie and follow the B9161 to Munlochy. Turn right onto the A832 and head for Fortrose. Just before you leave the village at the end of the High Street, turn right into Ness Road which will take you to the Point. Loch Ness via Drumnadrochit to Fort Augustus Urquhart Castle Drumnadrochit,  Inverness, Inverness-shire IV63 6XJ The magnificently situated Urquhart Castle, on the banks of Loch Ness, remains an impressive stronghold despite its ruinous state. Once one of Scotland’s largest castles, Urquhart’s remains include a tower house that commands splendid views of the famous loch and Great Glen. 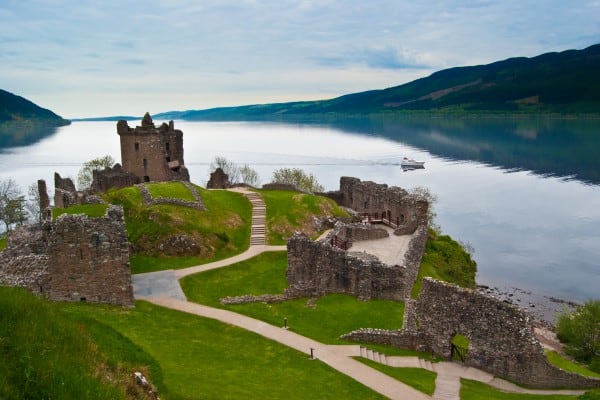 Carrying along the loch in a southerly direction, we arrive at Fort Augustus. Lying on the impressive 60 mile long Caledonian Canal, halfway between Inverness and Fort William, Fort Augustus offers spectacular views down Loch Ness and is a paradise for keen walkers and cyclists with many beautiful walks around the area, the most popular being the Great Glen Way.

At Fort Augustus visitors can also enjoy a visit to the Caledonian Canal Heritage Centre which details the history of the canal. Sit and watch the boats navigating the impressive system of locks or explore the Clansmen Centre. Visitors can explore the surrounding countryside by cruising Loch Ness, home to the world-famous Loch Ness monster. Cruises vary between short local circuits and journeys further up the loch to Urquhart Castle and Inverness. Cruises are guided and provide a fascinating insight into the history, folklore and geology of the area as well as an opportunity to enjoy the stunning scenery from an aspect that cannot be experienced from the land. To extend the experience, we recommend a homeward journey to Pitlochry . Continue the drive south along the banks of Loch Lochy to Spean Bridge, near Fort William and take the road south to Dalwhinnie. This road is renowned for its beautiful scenery, passing Loch Laggan. If you have visited Fort Augustus only, there may be time to stop at the wee Pottery, Gift shop and Tearoom (Coaldair PH20 1BT) at Laggan Bridge for some of the best chocolate cake in Scotland and rejoining the A9 south for Pitlochry at Dalwhinnie.